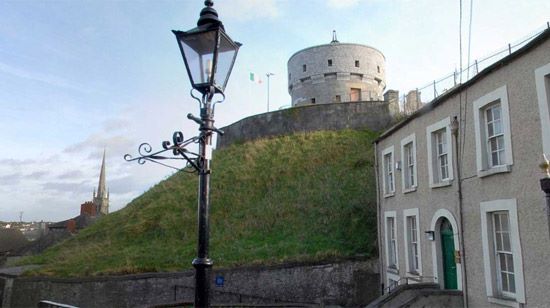 The Journal will be launched on Wednesday evening next (December 10th) at 8pm in the Governor’s House, Millmount.

Articles range from topics of contemporary national interest – like Dr. Brian Hanley’s important paper on how the First World War is remembered in Ireland – to local memories of Drogheda ships by Tom Winters. Séamus Bellew of the Louth Archaeological Society contributes a detailed study of the heraldry involved in the building of St. Peter’s RC church in West St.; the indefatigable John McCullen has a fascinating piece on the Big Houses along the Nanny Water and their connections with the political life of Drogheda; Eddie Fleming tells of the altar that migrated from Drogheda to Kentstown; Liam Reilly comes up with some more biographies of famous Droghedeans of the past; Labour historian Frank Gallagher has two eye-opening articles on social conditions in Drogheda in 1918 and the “Red Flag Revolt” in the town in 1919 and Seán Corcoran looks at the Dead of Drogheda in WW1.

The late Thomas Flynn remembers growing up in Boyne Terrace, along the Chord Rd in the 1920s and 30s; Audrey Smith brings us up to date with her researches on female crime and punishment in Drogheda in the 19th century;Brendan Matthews tells the story of Kate the Navvy and Ted Greene comes up with an account of an hilarious April Fool’s prank.

The Old Drogheda Society bookstall will be open on the night selling a wide range of books of local interest which make ideal Christmas presents especially for friends and loved ones living overseas. Everyone welcome.

For those who can’t make it on the night copies of the Journal will be available from Drogheda Museum Millmount ( Monday to Saturday9.30pm – 5.30pm and 2pm-5pm on Sundays) and from other local outlets.