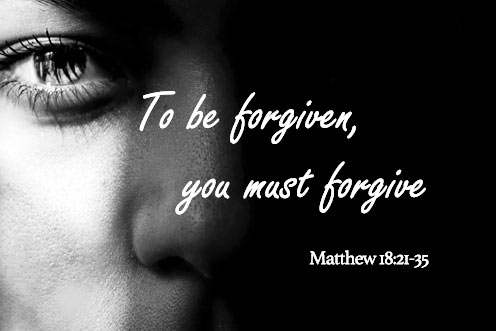 Peter went up to Jesus and said, ‘Lord, how often must I forgive my brother if he wrongs me? As often as seven times?’ Jesus answered, ‘Not seven, I tell you, but seventy-seven times.
‘And so the kingdom of heaven may be compared to a king who decided to settle his accounts with his servants. When the reckoning began, they brought him a man who owed ten thousand talents; but he had no means of paying, so his master gave orders that he should be sold, together with his wife and children and all his possessions, to meet the debt. At this, the servant threw himself down at his master’s feet. “Give me time” he said “and I will pay the whole sum.” And the servant’s master felt so sorry for him that he let him go and cancelled the debt. Now as this servant went out, he happened to meet a fellow servant who owed him one hundred denarii; and he seized him by the throat and began to throttle him. “Pay what you owe me” he said. His fellow servant fell at his feet and implored him, saying, “Give me time and I will pay you.” But the other would not agree; on the contrary, he had him thrown into prison till he should pay the debt. His fellow servants were deeply distressed when they saw what had happened, and they went to their master and reported the whole affair to him. Then the master sent for him. “You wicked servant,” he said “I cancelled all that debt of yours when you appealed to me. Were you not bound, then, to have pity on your fellow servant just as I had pity on you?” And in his anger the master handed him over to the torturers till he should pay all his debt. And that is how my heavenly Father will deal with you unless you each forgive your brother from your heart.’
DUNLEER
PARISH Current Newsletter Past Issues