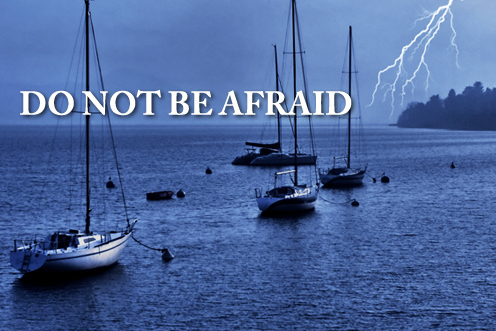 Jesus made the disciples get into the boat and go on ahead to the other side while he would send the crowds away. After sending the crowds away he went up into the hills by himself to pray. When evening came, he was there alone, while the boat, by now far out on the lake, was battling with a heavy sea, for there was a head-wind. In the fourth watch of the night he went towards them, walking on the lake, and when the disciples saw him walking on the lake they were terrified. ‘It is a ghost’ they said, and cried out in fear. But at once Jesus called out to them, saying, ‘Courage! It is I! Do not be afraid.’ It was Peter who answered. ‘Lord,’ he said ‘if it is you, tell me to come to you across the water.’ ‘Come’ said Jesus. Then Peter got out of the boat and started walking towards Jesus across the water, but as soon as he felt the force of the wind, he took fright and began to sink. ‘Lord! Save me!’ he cried. Jesus put out his hand at once and held him. ‘Man of little faith,’ he said ‘why did you doubt?’ And as they got into the boat the wind dropped. The men in the boat bowed down before him and said, ‘Truly, you are the Son of God.’
DUNLEER
PARISH Current Newsletter Past Issues