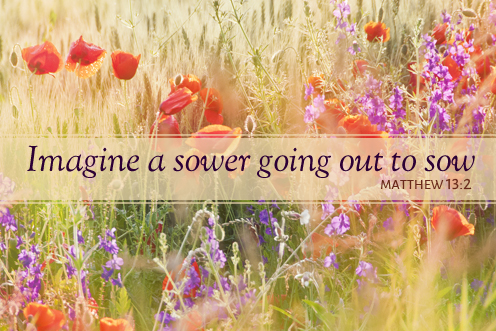 Jesus left the house and sat by the lakeside, but such large crowds gathered round him that he got into a boat and sat there. The people all stood on the beach, and he told them many things in parables.
He said, ‘Imagine a sower going out to sow. As he sowed, some seeds fell on the edge of the path, and the birds came and ate them up. Others fell on patches of rock where they found little soil and sprang up straight away, because there was no depth of earth; but as soon as the sun came up they were scorched and, not having any roots, they withered away. Others fell among thorns, and the thorns grew up and choked them. Others fell on rich soil and produced their crop, some a hundredfold, some sixty, some thirty. Listen, anyone who has ears!’
Then the disciples went up to him and asked, ‘Why do you talk to them in parables?’ ‘Because’ he replied, ‘the mysteries of the kingdom of heaven are revealed to you, but they are not revealed to them. For anyone who has will be given more, and he will have more than enough; but from anyone who has not, even what he has will be taken away. The reason I talk to them in parables is that they look without seeing and listen without hearing or understanding. So in their case this prophecy of Isaiah is being fulfilled:
You will listen and listen again, but not understand,
see and see again, but not perceive.
For the heart of this nation has grown coarse,
their ears are dull of hearing, and they have shut their eyes,
for fear they should see with their eyes,
hear with their ears,
understand with their heart,
and be converted
and be healed by me.
‘But happy are your eyes because they see, your ears because they hear! I tell you solemnly, many prophets and holy men longed to see what you see, and never saw it; to hear what you hear, and never heard it.
‘You, therefore, are to hear the parable of the sower. When anyone hears the word of the kingdom without understanding, the evil one comes and carries off what was sown in his heart: this is the man who received the seed on the edge of the path. The one who received it on patches of rock is the man who hears the word and welcomes it at once with joy. But he has no root in him, he does not last; let some trial come, or some persecution on account of the word, and he falls away at once. The one who received the seed in thorns is the man who hears the word, but the worries of this world and the lure of riches choke the word and so he produces nothing. And the one who received the seed in rich soil is the man who hears the word and understands it; he is the one who yields a harvest and produces now a hundredfold, now sixty, now thirty.’
DUNLEER
PARISH Current Newsletter Past Issues