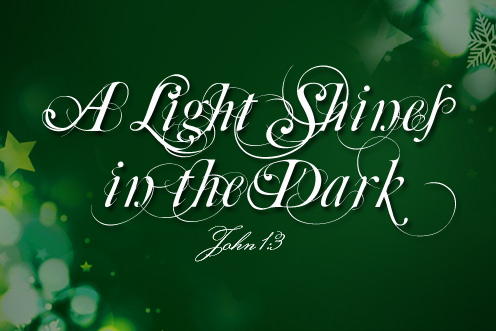 Gospel
John 1:1-18
In the beginning was the Word:
and the Word was with God
and the Word was God.
He was with God in the beginning.
Through him all things came to be,
not one thing had its being but through him.
All that came to be had life in him
and that life was the light of men,
a light that shines in the dark,
a light that darkness could not overpower.
A man came, sent by God.
His name was John.
He came as a witness,
as a witness to speak for the light,
so that everyone might believe through him.
He was not the light,
only a witness to speak for the light.
The Word was the true light
that enlightens all men;
and he was coming into the world.
He was in the world
that had its being through him,
and the world did not know him.
He came to his own domain
and his own people did not accept him.
But to all who did accept him
he gave power to become children of God,
to all who believe in the name of him
who was born not out of human stock
or urge of the flesh
or will of man
but of God himself.
The Word was made flesh,
he lived among us,
and we saw his glory,
the glory that is his as the only Son of the Father,
full of grace and truth.
John appears as his witness. He proclaims:
‘This is the one of whom I said:
He who comes after me ranks before me
because he existed before me.’
Indeed, from his fullness we have, all of us, received –
yes, grace in return for grace,
since, though the Law was given through Moses,
grace and truth have come through Jesus Christ.
No one has ever seen God;
it is the only Son, who is nearest to the Father’s heart,
who has made him known.