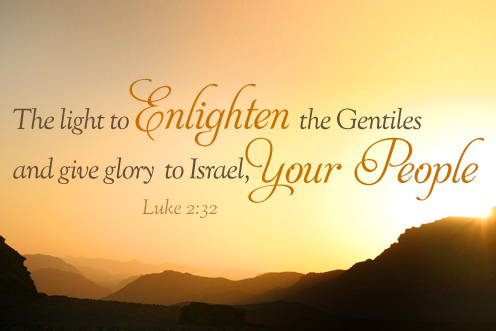 When the day came for them to be purified as laid down by the Law of Moses, the parents of Jesus took him up to Jerusalem to present him to the Lord, – observing what stands written in the Law of the Lord: Every first-born male must be consecrated to the Lord – and also to offer in sacrifice, in accordance with what is said in the Law of the Lord, a pair of turtledoves or two young pigeons.
Now in Jerusalem there was a man named Simeon. He was an upright and devout man; he looked forward to Israel’s comforting and the Holy Spirit rested on him. It had been revealed to him by the Holy Spirit that he would not see death until he had set eyes on the Christ of the Lord. Prompted by the Spirit he came to the Temple and when the parents brought in the child Jesus to do for him what the Law required, he took him into his arms and blessed God; and he said:
‘Now, Master, you can let your servant go in peace,
just as you promised;
because my eyes have seen the salvation
which you have prepared for all the nations to see,
a light to enlighten the pagans
and the glory of your people Israel.’
As the child’s father and mother stood there wondering at the things that were being said about him, Simeon blessed them and said to Mary his mother, ‘You see this child: he is destined for the fall and for the rising of many in Israel, destined to be a sign that is rejected – and a sword will pierce your own soul too – so that the secret thoughts of many may be laid bare.’
There was a prophetess also, Anna the daughter of Phanuel, of the tribe of Asher. She was well on in years. Her days of girlhood over, she had been married for seven years before becoming a widow. She was now eighty-four years old and never left the Temple, serving God night and day with fasting and prayer. She came by just at that moment and began to praise God; and she spoke of the child to all who looked forward to the deliverance of Jerusalem.
When they had done everything the Law of the Lord required, they went back to Galilee, to their own town of Nazareth. Meanwhile the child grew to maturity, and he was filled with wisdom; and God’s favour was with him.
DUNLEER
PARISH Current Newsletter Past Issues