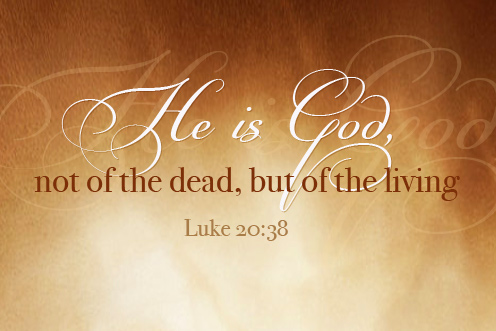 Some Sadducees – those who say that there is no resurrection – approached Jesus and they put this question to him, ‘Master, we have it from Moses in writing, that if a man’s married brother dies childless, the man must marry the widow to raise up children for his brother. Well then, there were seven brothers. The first, having married a wife, died childless. The second and then the third married the widow. And the same with all seven, they died leaving no children. Finally the woman herself died. Now, at the resurrection, to which of them will she be wife since she had been married to all seven?’
Jesus replied, ‘The children of this world take wives and husbands, but those who are judged worthy of a place in the other world and in the resurrection from the dead do not marry because they can no longer die, for they are the same as the angels, and being children of the resurrection they are sons of God. And Moses himself implies that the dead rise again, in the passage about the bush where he calls the Lord the God of Abraham, the God of Isaac and the God of Jacob. Now he is God, not of the dead, but of the living; for to him all men are in fact alive.’
DUNLEER
PARISH Current Newsletter Past Issues