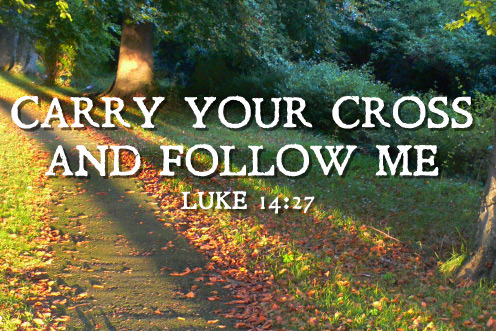 Great crowds accompanied Jesus on his way and he turned and spoke to them. ‘If any man comes to me without hating his father, mother, wife, children, brothers, sisters, yes and his own life too, he cannot be my disciple. Anyone who does not carry his cross and come after me cannot be my disciple.
‘And indeed, which of you here, intending to build a tower, would not first sit down and work out the cost to see if he had enough to complete it? Otherwise, if he laid the foundation and then found himself unable to finish the work, the onlookers would all start making fun of him and saying, “Here is a man who started to build and was unable to finish.” Or again, what king marching to war against another king would not first sit down and consider whether with ten thousand men he could stand up to the other who advanced against him with twenty thousand? If not, then while the other king was still a long way off, he would send envoys to sue for peace. So in the same way, none of you can be my disciple unless he gives up all his possessions.’
DUNLEER
PARISH Current Newsletter Past Issues