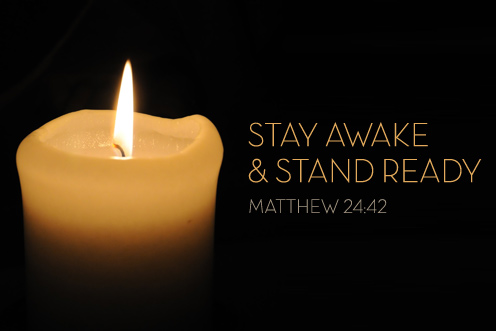 Gospel
Luke 12:32-48
Jesus said to his disciples: ‘There is no need to be afraid, little flock, for it has pleased your Father to give you the kingdom.
‘Sell your possessions and give alms. Get yourselves purses that do not wear out, treasure that will not fail you, in heaven where no thief can reach it and no moth destroy it. For where your treasure is, there will your heart be also.
‘See that you are dressed for action and have your lamps lit. Be like men waiting for their master to return from the wedding feast, ready to open the door as soon as he comes and knocks. Happy those servants whom the master finds awake when he comes. I tell you solemnly, he will put on an apron, sit them down at table and wait on them. It may be in the second watch he comes, or in the third, but happy those servants if he finds them ready. You may be quite sure of this, that if the householder had known at what hour the burglar would come, he would not have let anyone break through the wall of his house. You too must stand ready, because the Son of Man is coming at an hour you do not expect.’
Peter said, ‘Lord, do you mean this parable for us, or for everyone?’ The Lord replied, ‘What sort of steward, then, is faithful and wise enough for the master to place him over his household to give them their allowance of food at the proper time? Happy that servant if his master’s arrival finds him at this employment. I tell you truly, he will place him over everything he owns. But as for the servant who says to himself, “My master is taking his time coming,” and sets about beating the menservants and the maids, and eating and drinking and getting drunk, his master will come on a day he does not expect and at an hour he does not know. The master will cut him off and send him to the same fate as the unfaithful.
The servant who knows what his master wants, but has not even started to carry out those wishes, will receive very many strokes of the lash. The one who did not know, but deserves to be beaten for what he has done, will receive fewer strokes. When a man has had a great deal given him, a great deal will be demanded of him; when a man has had a great deal given him on trust, even more will be expected of him.’