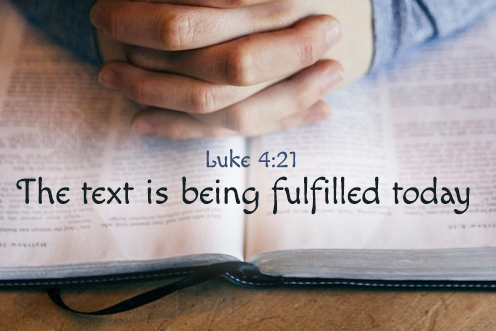 Seeing that many others have undertaken to draw up accounts of the events that have taken place among us, exactly as these were handed down to us by those who from the outset were eyewitnesses and ministers of the word, I in my turn, after carefully going over the whole story from the beginning, have decided to write an ordered account for you, Theophilus, so that your Excellency may learn how well founded the teaching is that you have received.
Jesus, with the power of the Spirit in him, returned to Galilee; and his reputation spread throughout the countryside. He taught in their synagogues and everyone praised him.
He came to Nazara, where he had been brought up, and went into the synagogue on the sabbath day as he usually did. He stood up to read and they handed him the scroll of the prophet Isaiah. Unrolling the scroll he found the place where it is written:
The spirit of the Lord has been given to me,
for he has anointed me.
He has sent me to bring the good news to the poor,
to proclaim liberty to captives
and to the blind new sight,
to set the downtrodden free,
to proclaim the Lord’s year of favour.
He then rolled up the scroll, gave it back to the assistant and sat down. And all eyes in the synagogue were fixed on him. Then he began to speak to them, ‘This text is being fulfilled today even as you listen.’
DUNLEER
PARISH Current Newsletter Past Issues