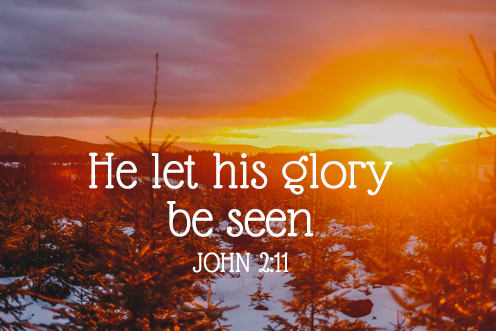 There was a wedding at Cana in Galilee. The mother of Jesus was there, and Jesus and his disciples had also been invited. When they ran out of wine, since the wine provided for the wedding was all finished, the mother of Jesus said to him, ‘They have no wine.’ Jesus said ‘Woman, why turn to me? My hour has not come yet.’ His mother said to the servants, ‘Do whatever he tells you.’ There were six stone water jars standing there, meant for the ablutions that are customary among the Jews: each could hold twenty or thirty gallons. Jesus said to the servants, ‘Fill the jars with water’, and they filled them to the brim. ‘Draw some out now’ he told them ‘and take it to the steward.’ They did this; the steward tasted the water, and it had turned into wine. Having no idea where it came from – only the servants who had drawn the water knew – the steward called the bridegroom and said, ‘People generally serve the best wine first, and keep the cheaper sort till the guests have had plenty to drink; but you have kept the best wine till now.’
This was the first of the signs given by Jesus: it was given at Cana in Galilee. He let his glory be seen, and his disciples believed in him.
DUNLEER
PARISH Current Newsletter Past Issues