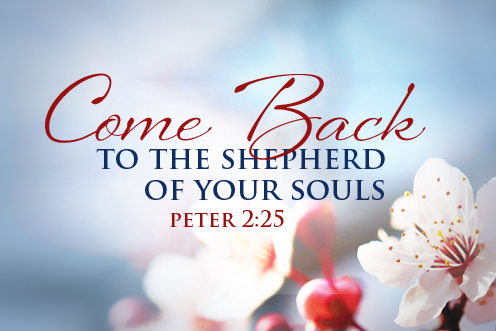 Jesus said:
‘I tell you most solemnly, anyone who does not enter the sheepfold through the gate, but gets in some other way is a thief and a brigand. The one who enters through the gate is the shepherd of the flock; the gatekeeper lets him in, the sheep hear his voice, one by one he calls his own sheep and leads them out. When he has brought out his flock, he goes ahead of them, and the sheep follow because they know his voice. They never follow a stranger but run away from him: they do not recognise the voice of strangers.’
Jesus told them this parable but they failed to understand what he meant by telling it to them.
So Jesus spoke to them again:
‘I tell you most solemnly,
I am the gate of the sheepfold.
All others who have come
are thieves and brigands;
but the sheep took no notice of them.
I am the gate.
Anyone who enters through me will be safe:
he will go freely in and out
and be sure of finding pasture.
The thief comes
only to steal and kill and destroy.
I have come
so that they may have life and have it to the full.’

One of Christ’s greatest teaching gifts was his use of images from the environment in which
people lived and worked. Herding was is one of the daily chores of many people in the Holy
Land. Looking over the old death registers of our own parish, it is not uncommon to find
someone described as having been ‘a herd’. Shepherds, leading their flock through the
dusty desert countryside, from pasture to water to shelter, were not and still are not a high
profile group. In Christ’s time, they were regarded as dubious characters, low life, and
shifty. Their profession of herd or shepherd was given some dignity by being the first
guests of the infant Jesus in the crib. It was their only claim to fame. Jesus chose the image
of shepherd to describe his own role and the role of those who would follow him in
ministering to God’s people. He draws a picture of the Good Shepherd as one with
knowledge of his flock, with an interest in their welfare, and with a love for them which is
shown in his willingness to literally pour out his life in service, to lay down his life for his
sheep. The Good Shepherd is not just efficient. He is good. His flock know and listen, in
response to this goodness. This image is sharply contrasted with the hireling, who is
motivated by his wage and while he might be efficient, he has no real love for the sheep.
He looks after himself first, and rather than laying down his life for his sheep, seeks rather
to save his own skin first. The result is a scattered sheep and an absent shepherd.
The care of the Good Shepherd is not confined to his own sheep. There are others, always,
whom he seeks to lead and protect and care for, as well. The flock is always in danger too,
from inside and outside. Some of the flock can be very exclusive, not wanting or allowing
others to join in. Others of the flock can be proud and prefer to live, cut off from the flock,
claiming to fare just as well, to live even better maybe, without being part of the flock. We
have a duty to fulfil the roles of shepherd and sheep in our lives, to be good and caring
leaders, and to serve those in our care. We have a duty, after the example of Christ, to
know his voice and to listen and know the voice of those whose welfare depends on us. We
have a duty to allow ourselves to be led, by those we judge as good and wise and caring.
We are not only safer within the flock, we need each other, and we learn from each other,
and we find nourishment together, in communion.
We believe in the communion of saints, the great flocking of those redeemed from death,
shepherded by Christ into the promised land, the pastures of eternal life. The love of the
father for the son is passed on by the son to his people as he gathers in the scattered
people of God. Obedient to the father’s command, the good shepherd works to gather all
into unity, into one flock, acknowledging one voice, living in service of one another. Allow
yourself to be led, by the son of the father, by the shepherd who is good.