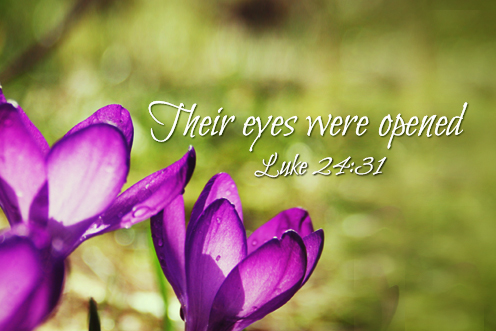 Two of the disciples of Jesus were on their way to a village called Emmaus, seven miles from Jerusalem, and they were talking together about all that had happened. Now as they talked this over, Jesus himself came up and walked by their side; but something prevented them from recognising him. He said to them, ‘What matters are you discussing as you walk along?’ They stopped short, their faces downcast.
Then one of them, called Cleopas, answered him, ‘You must be the only person staying in Jerusalem who does not know the things that have been happening there these last few days.’ ‘What things?’ he asked. ‘All about Jesus of Nazareth’ they answered ‘who proved he was a great prophet by the things he said and did in the sight of God and of the whole people; and how our chief priests and our leaders handed him over to be sentenced to death, and had him crucified. Our own hope had been that he would be the one to set Israel free. And this is not all: two whole days have gone by since it all happened; and some women from our group have astounded us: they went to the tomb in the early morning, and when they did not find the body, they came back to tell us they had seen a vision of angels who declared he was alive. Some of our friends went to the tomb and found everything exactly as the women had reported, but of him they saw nothing.’
Then he said to them, ‘You foolish men! So slow to believe the full message of the prophets! Was it not ordained that the Christ should suffer and so enter into his glory?’ Then, starting with Moses and going through all the prophets, he explained to them the passages throughout the scriptures that were about himself.
When they drew near to the village to which they were going, he made as if to go on; but they pressed him to stay with them. ‘It is nearly evening’ they said ‘and the day is almost over.’ So he went in to stay with them. Now while he was with them at table, he took the bread and said the blessing; then he broke it and handed it to them. And their eyes were opened and they recognised him; but he had vanished from their sight. Then they said to each other, ‘Did not our hearts burn within us as he talked to us on the road and explained the scriptures to us?’
They set out that instant and returned to Jerusalem. There they found the Eleven assembled together with their companions, who said to them, ‘Yes, it is true. The Lord has risen and has appeared to Simon.’ Then they told their story of what had happened on the road and how they had recognised him at the breaking of bread.

All of us have to travel the hard road of disappointment at some times of our lives. Like the Emmaus journeyers on their seven mile hike from Jerusalem, it’s good to have a companion to talk to along the way. ‘Goiraíonn beirt bothar’, two shorten a road as the Irish proverb puts it. The post mortem; the reflection after the event, is an important part of the experience. The important and the trivial get sorted. Our friends on their village journey were trying to make sense of all that has happened, and all that failed to happen. They had expected to march down the broad avenue of victory and glory. Now, all they have is the hard road of defeat, disillusionment and despondency. Their faces are, ‘downcast’. They, ‘stop short’ at the enquiry of the stranger who joins them on their journey. The stranger revealed to them that all happened as it had been promised in the sacred scriptures. The scriptures had foretold it all. How easily we forget the lessons of the past. Events unfold not as we might wish or will them to. All things develop in accord with God’s providence and will and usually not in rhythm with our own designs in life and our grand plan for the world. The best laid plans of mice and men go oft astray, to paraphrase Robert Burns’ ploughman on turning over the dormouse’s nest. The stranger set their hearts on fire, opened their eyes; made them thirsty for more. They invited him to stay though he had called them, ’foolish men’ and judged them, ‘slow to believe’. They had sought and expected glory while bypassing the way of the cross. As he prayed a blessing over the bread, the penny dropped. They recognised him. As recognition dawned, his presence melted as a morning mist gives way to the light of day. These hikers to Emmaus turned on their heels to return to Jerusalem. The women were right after all! They should never have doubted their word. He had risen. Hadn’t they seen him with their own eyes? His breaking open of the scriptures had set their hearts on fire. Didn’t they recognise him at the breaking of bread?